Thanks to Mark Grant for researching this list of the purveyors of fine and perhaps not so fine classic and vintage motorcycles:

Amidst the deluge of PPI mis-selling calls that characterise life in the 2010s it’s a rare pleasure to pick up the phone and find Archie Beggs at the other end. Archie’s generosity of spirit knows no bounds and on this occasion the call would result in the fulfilment of one of this particular schoolboy’s dreams. The call started simply enough with the offer to have a canter on Archie’s 600cc Model 9/9A/90 based special. I already knew that this bike featured an engine from his racing days and so was obviously keen to try it for size. We arranged a mutually convenient time and I was just about to hang-up when Archie landed the sucker-punch : “and while we’re there, maybe we’ll get the Brough out for a spin too”

The day dawned cold and clear as I headed up the Wirral and I gradually became aware of an uneasy sensation in the pit of my stomach. I marked it down to the macro-consumption of the micro-brewed beer the night before. Ploughing onwards on the M53 I put the feeling to one side and instead concentrated on coaxing the last few mph from the little Honda Civic. On arrival we dispensed swiftly enough with conventional pleasantries and were quickly on with the business of the day. First out of the trap was the 600cc Sunbeam Model 9/9A/90 pictured below. 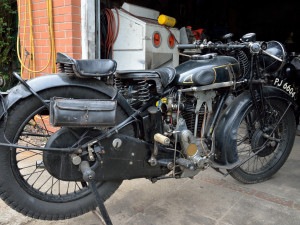 Nominally of 1932 vintage, the engine in this particular bike features a 600cc piston in conjunction with a Model 90 hairpin-spring head. The motor was put together in Archie’s sand-racing days and the pukka Amal 29/001 M90 carburettor demonstrates a clear sporting intent despite the valanced guards, pillion provision and lighting kit on the rest of the bike.

Also of interest is the fact that this is a single-port head design which some believe to offer better performance than the twin-port versions more usually found on the OHV Sunbeams. Something to do with exhaust gas velocity and back-pressures perhaps? Again Archie’s racing experience is demonstrated as the bike has been fitted with the later and larger Model 95-style front brake. Sunbeam’s Webb-type front forks have a dog-leg kink at the bottom which is required to make space for this improved performance brake. 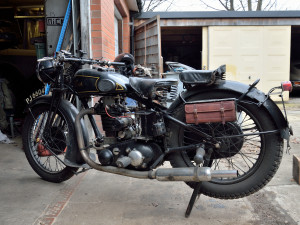 Having been stood for a while, the bike was a little reluctant to start despite teasing with a few pops and bangs and so a quick shove down the drive was used to bring it to life without problem. I just wasn’t prepared for the civilised exhaust note nor the gentlemanly tickover that the bike settled into after barely a few minutes warming, expecting perhaps a more recalcitrant or cantankerous beasty. Thinking about this on the journey home it was really no surprise that Archie’s bikes always seem to run so well as success on the sand would rarely be achieved with anything other than a perfectly setup motor.

What was it like to ride? Smooth, powerful and comfortable were the overwhelming feelings once the bike was underway. The gears selected as well as any Sunbeam I have ridden i.e. a small crunch into first which then accompanied only careless gear shifts. It really felt like the sort of bike you could spend the day on and easily cover large distances in comfort. The motor pulls strongly in all gears which would make lazy riding a pleasure but once the revs rise it certainly picks up it skirts and becomes an altogether more intense experience. You could feel the extra weight over my own Model 90 for sure but this added to the sure-footed and stable feeling that the bike exhibits.

The uneasy feeling returned when I got back to the garage where the Brough was now waiting its turn to be let out of the stable. 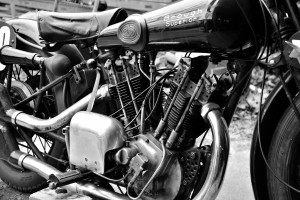 I realised then that I’d never ridden or driven anything that was easily worth more than my house. It clearly wasn’t last night’s beer consumption but apprehension at the consequences of even a minor mishap on such a rare motorcycle. The 1927 Brough Superior SS100 is a true motorcycling icon with the powerful OHV JAP motor providing genuine 100mph performance at a time when few vehicles could manage half that. Little wonder that T.E. Lawrence used a string of SS100 Broughs to get his kicks. A bit of technique is required to start it so this was left to  Kenny Crawford who has ridden the bike at events such as the 1000 Bikes and even competed with it in a few hill climbs. Long and low, the bike barks through the twin Brooklands cans as I gingerly sling a leg over and familiarise myself with the controls. Although Kenny can use the side mounted gear lever with his leg I chose to make do using it as a conventional hand-shift. The bike lunges forward as I release the clutch and takes me up the drive and onto the lane. 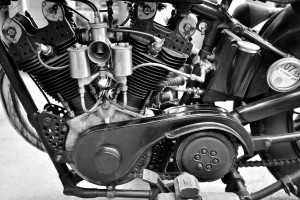 Kenny has told me that they have lowered the gearing  but first gear still feels as tall as the bike is long taking it easily towards 30mph before I reach down and shift into second. There is some weight to the bike of course  but it is carried so low that it is surprisingly easy to flick around as I navigate the estate towards the open lanes. Pedestrians stand, stare and gape as I thunder past clearly recognising that this is no ordinary motorcycle that shatters their suburban idyll. But once the road clears my apprehension evaporates as I realise this is it, the ride of a lifetime. I just have to open the taps and the bike drives forward, hard too. It picks up revs so fast I have to snatch into top way sooner than I expected. We’re now charging along towards a series of bends so I throttle off and let the bike slow to a sensible speed for the first corner. I’ve been warned about the front brake and wasn’t taking any chances late braking. 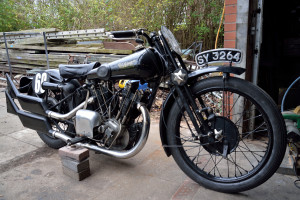 I can see no obstacles through a short series of left-right flicks and let the bike off its leash for a few more seconds drunk on the sound, smell, speed and sheer nostalgia of the experience. I probably don’t go any faster than 60mph on this short run but the bike clearly has so much in reserve I don’t doubt GB’s performance claims for the model for a second. I take it steady doing a U-turn on a mini roundabout conscious of the length of the bike and not wanting to stall as I’d need Kenny for sure to get started again. A second run at the series of bends with more confidence this time and we’re really flying by the time I reach suburbia and the 30mph limit. As I slow I realise I can barely feel my fingers with the cold but relish the last few minutes simply posing on this monument to engineering and marketing. After all, GB not only knew how to build a fine motorcycle but understood very well what was needed to sell them too with a multitude of high-profile sporting successes and clients. It is said that Lawrence would pick up a bike from the works on a Friday and return it after the weekend with the tyre worn through to the canvas. And thanks to Archie, I can quite understand why. 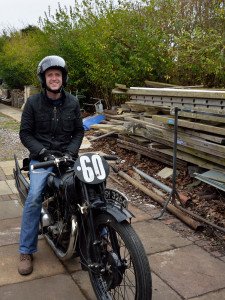 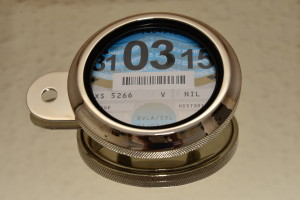 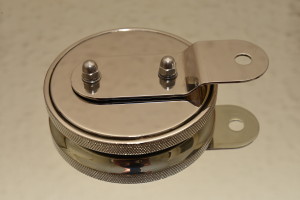 Don’t forget to checkout the Sunbeamland shop where there are a variety of items in stock including a limited number of these vintage tax disc or license disc holders. They are replicas of an original late 1920’s Pennant item that was loaned to me some time ago and would make a great addition to any quality vintage motorcycle i.e your Brough Superior, Sunbeam, Velocette or cammy Norton.

There are also various other vintage motorcycle spares that are left over from various projects that might be useful. For example, we have quite a number of different controls and levers including items from Amal, Amac and Bowden. Decompressors, valve lifters, magneto advance/retard control.. that sort of thing. Have a look round and let me know if there is anything you might be interested in.

There’s not much left in the seat department, so grab a bargain whilst there is anything left in stock. I’ll accept sensible offers on most items just to clear the space.