Nothing is as simple as it seems and when working on old stuff without a point of reference life can get pretty complicated quite rapidly indeed. To cut to the chase… the Amac 10MDY needle jet adapter looks good and puts the new Amal 29 jet in the right place within the jet block but what needle should I use? The original idea was to use an Amal 29 needle along with the 29 needle jet. I’m sure this would work and probably work well but is it “correct”? Whatever correct means….

For me it is all about setting a new datum from which to work when fine tuning the carburation. If the different parts and systems of the carburettor are working in approximately the right regions then changes and adjustments on the bike start to make sense. After all, there’s little point fitting a weaker slide to compensate for an oversized or worn needle. Even the enrichment device might finally start to have some effect – there was no way it could have made any difference with the original settings and state of the carb. An obsession with this comes from hours and cash invested on the dyno with racing two-strokes that are hyper-sensitive to these issues. Even my Triumph Bonnie gained a healthy bhp increase after some careful tweaking from its original “standard” settings to compensate for the fuel that is available today. 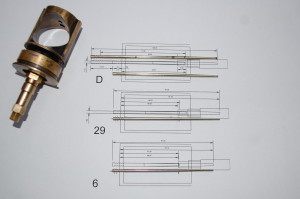 So, a quick study of needles and tapers revealed that  fitting an Amal 29 needle in the 3rd clip would mean that the bike would be running on the tapered section of the needle after the throttle was opened only one or two mm which is where the slide cutaway and pilot jet should be in charge of the charge. Unable to Google anything concrete, the best I came up with was that the parallel straight portion of the needle should be down the needle jet until maybe 1/4 throttle after which it should start to richen up on the taper. I found a D needle from a monobloc carb in the dartboard and this seemed to have a very similar taper to that of the 29 but was conveniently much longer. After a few hours with the Emco mini-lathe making up some collets, bushes and super-slim parting tool we produced the shortened needle shown below. The 5 needle clip positions are now adjusted to put the start of taper in what could be the “correct” position.

Will it work? I have no idea.