A new development here at Sunbeamland is that we now have a vintage motorcycles for sale section added to the shop. To get the ball rolling we have this rather interesting 1929 BSA sloper. Being 1929 vintage, it is of course eligible for VMCC events such as the Banbury Run. If you’d like to know more, drop us a line and we’ll put you in touch.

Julian Richardson, data logging guru and head of Flextion Technology, proved that it is still possible to grab a bargain from the online auctions by taking home this rather tasty 1954 Triton. The 1955 pre-unit T110 motor appears to be freshly rebuilt and nicely slotted into the wideline Norton frame. 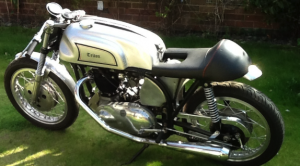 Roadholder forks with external springs, twin leading shoe front brake with scoop and swept back pipes prove corners have not been cut with the build of this bike. Unlike some other Tritons out there, this bike manages to looks neat, tidy and somehow “integrated” – as if the disparate parts were always meant to be together. 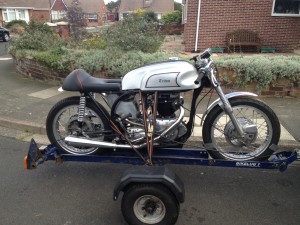 More usually found recording the heroics of Fast Bikes journos on exotic superbikes, it will certainly be interesting to see what lean angle Julian’s Axis data logger reports when he takes it for a burn-up to the local biker’s caff on a Sunday morning.

I can’t describe how excited I was to make contact with John Rooney from north of the border who has acquired this stunning and impossibly original Sunbeam Model 90. 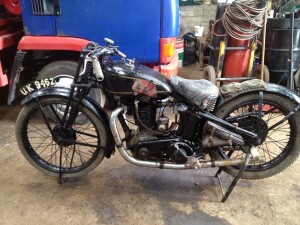 The bike was originally registered to the Marston factory before being sold on two years later. It has webb-type forks fitted rather than druids which would suggest late 1930 to 1931 but it was common practice to fit the later, improved forks to earlier models.

The bike has been in the same ownership for the last 50 years before John rescued it from a shed and I am delighted to say that he plans to get it going with only the minimal necessary work. New tyres might just be required but the bike has many of the original fittings and fasteners that are so difficult to find or replicate. 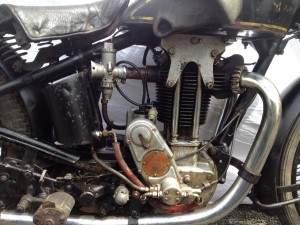 There is currently little paperwork but of course being a UK registered Marston bike we all want to know what racing history the bike has. The engine number of the bike is only 2 digits different from my own saddle tank 90 (shown below) which has TT and MGP history, so is it possible that this bike is from the same 1930 team? 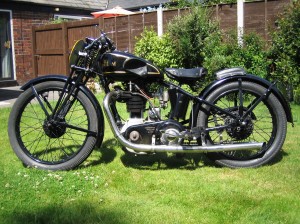 If anyone can shed any light on the history of John’s bike, please get in touch and let us know.